Malaria advice for travelers to Nepal

What is malaria? Malaria is a parasitic infection of the blood transmitted by night-biting mosquitoes. The parasite named Plasmodium, multiplies in the liver before infecting red blood cells. Symptoms of malaria include fever, chills, headache, vomiting and can appear 10-15 days or up to a year later following a mosquito bite. If not treated promptly, the severe type of the disease caused by Plasmodium falciparum malaria may be rapidly fatal, especially in children and pregnant women.  Malaria risk is highest in sub Saharan Africa where Plasmodium falciparum is predominant. Risk is much lower in Asia and South America where the predominant malaria species is Plasmodium Vivax which causes a less severe form of the disease. However, infection caused by P.Vivax can stay dormant in the liver causing a late relapse.

What is the risk of malaria in Nepal?

Although Nepal is endemic for malaria, the risk for the average tourist or expatriate seems very low in Nepal. We have not seen a single case of malaria that originated in Nepal in a traveler in the past 25 years. We believe that there is no malaria risk in Kathmandu, Pokhara or the mountain trekking areas.  Malaria does exist in the southern belt of Nepal (the Terai) particularly in the Western part and risk is highest in the months of June, July and August. Most malaria in Nepal is Vivax. Latest micro-stratification study conducted at the local (ward) level by the Epidemiology and Disease Control Division (EDCD) in Nepal in 2018 shows a declining trend in malaria transmission risk. See map below: 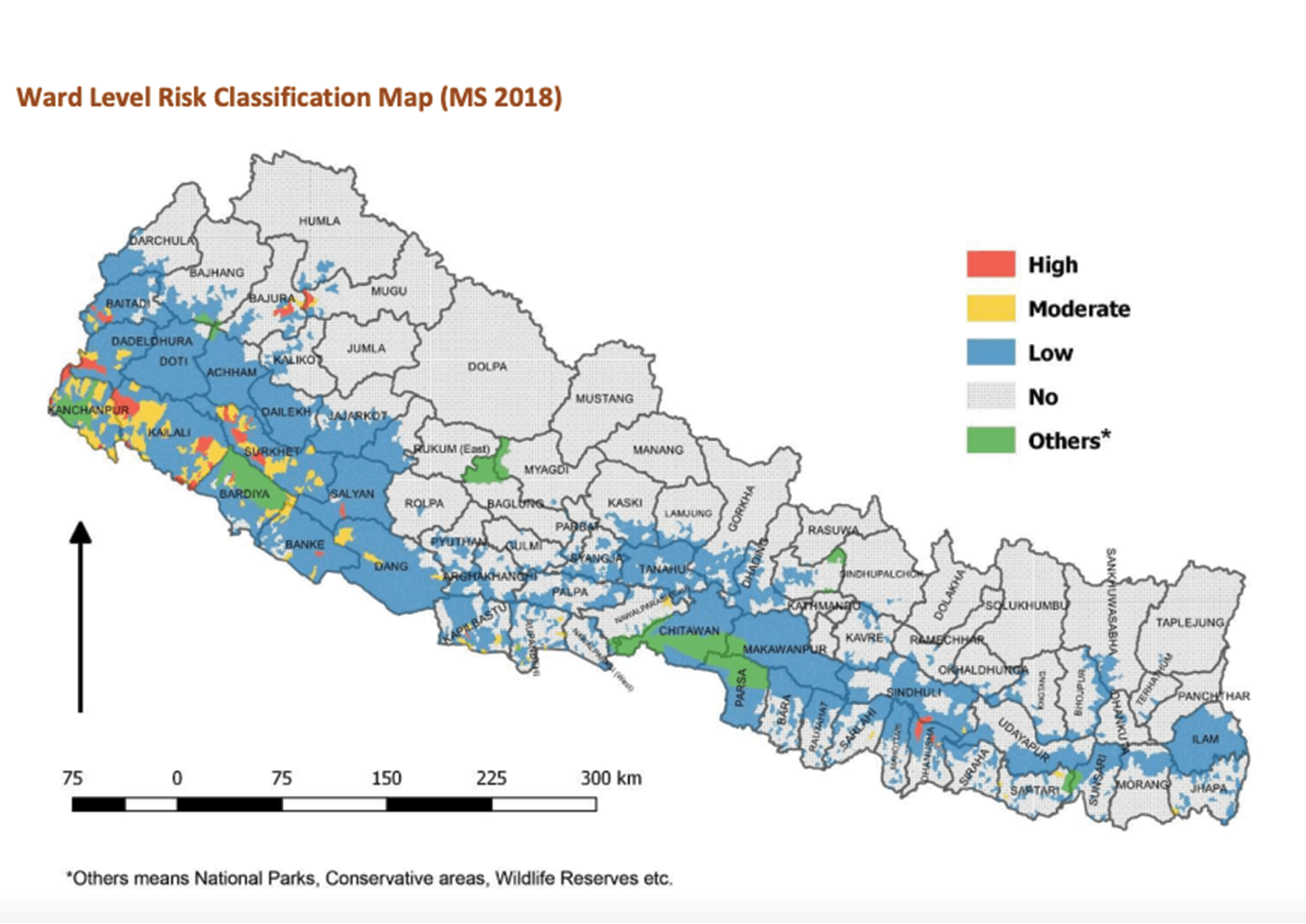 Chitwan, although it lies in theTerai, has a very low malaria risk. We recommend mosquito bite precautions and no malaria prophylactic medication for short visits to Chitwan national park even in the monsoon season.

How does one prevent malaria in Nepal?

Malaria prevention means protecting from mosquito bites and taking medication to suppress the disease. Medications do not prevent initial infection; they suppress or prevent symptoms caused by blood stage parasites. Since malaria is transmitted by the bite of mosquitoes, it is just as important to prevent bites as it is to take tablets.

Which medications are used to prevent malaria in Nepal?

In many parts of the world where Falciparum malaria exists, the parasites have developed resistance to Chloroquine; this is true in Nepal as well.  For high risk travel,we advise one of the four e.g. Mefloquine, Doxycycline, Atovaquone/proguanil or Tafenoquine.

Although Mefloquine (Lariam) is very effective and well tolerated by majority of users, it causes troublesome side effects in up to 15% of users. Mefloquine has been reported to cause trouble sleeping, dizziness, peculiar dreams, feelings of disorientation, confusion, mood swings, anxiety, depression, nausea, stomach discomfort, visual disturbances, and palpitations. These effects can be most unpleasant but are reversible on stopping the drug. The effects usually occur within the first few doses, hence the need to start two weeks before travel. Do not take mefloquine on an empty stomach or within 24 hours of heavy alcohol use or these symptoms will be much worse.  Taking the medication with dinner and plenty of water will decrease the risk of side-effects.

Mefloquine can be used in children and in the second and third trimester of pregnancy. Women should use reliable contraception while taking it, and for three months after the last dose. Mefloquine is not recommended for travelers with a personal or family history of psychiatric or seizure disorders. If unexplained anxiety, depression, hallucinations, severe nightmares or confusion occurs, you must stop taking this drug and see a doctor.

Mefloquine may interfere with tasks requiring fine co-ordination. It is not recommended for pilots and scuba divers. Quinine (e.g. for leg cramps) should not be taken at the same time as mefloquine. The tablet is taken weekly.

This drug combines anti-malarial properties of 2 drugs atovaquone 250mg and proguanil 100mg in a single tablet. The drug is effective against both liver and blood stages of the malaria parasite. Because of this, the drug can be discontinued one week after leaving the malaria risk area.  It can be taken for short term use for malaria prevention. It cannot be taken by children weighing less than 5kg, pregnant women or by patients with severe kidney disease.

This drug is extremely well tolerated and the most common side effects are gastro-intestinal including nausea, vomiting, abdominal pain – but no more commonly than with a placebo. The tablet is taken daily.

Doxycycline is an antibiotic that is as effective as mefloquine and atovaquone/proguanil against chloroquine-resistant falciparum malaria. It should not be taken by children under 8 years of age or by pregnant and breastfeeding women. Do not take doxycycline if you are allergic to tetracycline drugs. Some people are more prone to sunburn whilst taking this medication, therefore avoid excessive sun exposure (use a hat and good quality sunblock).

It is most important to take doxycycline with food and a full glass of water/liquid to prevent irritation of the esophagus, felt as pain or burning in the center of the chest. Do not take doxycycline before going to bed or even lying down. It is preferable to avoid antacids (e.g. Gelusil, Mylanta) whilst taking doxycycline. Doxycycline use may promote vaginal itching or thrush. Women prone to thrush after antibiotics should carry a supply of anti- thrush medication just in case. The tablet is taken daily.

This is a new drug licensed for the prevention of treatment of malaria in 2018 in the USA. It is important to check G6PD level before taking tafenoquine. It is not used in children, pregnancy, lactation, or in persons with history of psychoses.

How to take malaria tablets

Weekly tablets must be taken on the same day each week e.g. “Monday is Malaria day”

To the bitter end

If you stop your tablets early, you may get malaria. These tablets are not like regular antibiotics- some of these take many weeks to kill all the malarial parasites.

If you forget a dose

Alcohol: You may drink alcohol in moderation whilst taking malaria tablets. However, heavy alcohol consumption within 24 hours of a dose of Mefloquine (Lariam) is likely to provoke hallucinations, anxiety, behavior changes or even epileptic fits.

How are the medications taken?

Mefloquine: Start 2 weeks before, take weekly and for 4 weeks after.

Doxycycline: Start 1 day before, take daily and for 4 weeks after

Atovaquone/proguanil (Malarone): Start 1 day before, take daily and for 1 week after

Tafenoquine: Start 200 mg daily for 3 days before travel, take weekly during and for 1 week after travel.

No tablet is 100% effective in preventing malaria;

Malaria prevention in children: Mefloquine can be used in children of all ages and weights. Doxycycline can be used in children who are at least 8 years of age. Atovaquone/proguanil (malarone) can be used in children greater than 5Kg (11 lbs.). Antimalarial tablets can be quite bitter and come only in tablets. Pharmacists can be requested to pulverize the needed amount and prepare capsules for each dose. Capsules can be opened and medication mixed with palatable food before administering to the child. Pediatric doses of antimalarial medication are currently not available at the CIWEC Clinic. Since request for pediatric tablets have been very few over the years, we have not been stocking up on these.

Malaria prevention in pregnancy: Malaria infection in pregnant women can be more severe than in non-pregnant women. Malaria can also increase the risk of untoward pregnancy outcomes. Since no prophylactic regimen is completely effective, it is best if travel to malaria endemic areas can be postponed or avoided by women who are pregnant or likely to be pregnant during the trip. If a trip has to be made, mefloquine is the only drug that is considered safe for use in second and third trimester of pregnancy. It may also be safe in the first trimester of pregnancy.

Malaria prevention during breastfeeding: Very small amounts of chloroquine and mefloquine are excreted in the breast milk of lactating women and these drugs can be used by breastfeeding women for malaria prevention. The amount of drug transferred through breast milk is not felt to be harmful to the nursing infant but it is not sufficient to provide adequate antimalarial protection. Doxycycline is not recommended for prophylaxis in breast feeding women. Atovaquone/proguanil is not recommended in women who are breast-feeding infants weighing less than 5kg.

Prevention of relapse of vivax malaria or terminal prophylaxis: P.vivax parasites can persist in the liver and can cause a late relapse for as long as 4 years after leaving the malarious areas. Presumptive anti-relapse therapy with primaquine phosphate 30mg daily for 2 weeks or tafenoquine 300 mg single dose can decrease the risk of relapses by acting against the liver stage parasites. Primaquine and tafenoquine can cause hemolysis in persons deficient in an enzyme called glucose 6 phosphate dehydrogenase (G6PD). Before recommending these drugs, one has to make sure that G6PD level is normal in an individual. G6PD levels can be checked at the CIWEC clinic.